Hanoi (VNA) – Prime Minister Pham Minh Chinh hosted a reception in Hanoi on July 22 for the Governor of the Japan Bank for International Cooperation (JBIC), Maeda Tadashi, during which the Prime Minister praised the bank’s efficient and positive cooperation and its provision of loans for major infrastructure and large-scale projects in Vietnam.

He said he hoped Japan and JBIC would continue to coordinate with Vietnamese agencies to seek more effective methods of collaboration to further strengthen the Extended strategic partnership between Vietnam and Japan in the new period.

The Vietnamese Prime Minister proposed that Japan and JBIC support Vietnam in building a fast-growing and sustainable economy on a larger scale with greater autonomy and better international integration.

Vietnam hopes to receive support from Japan to achieve net zero emissions in 2050 through existing cooperation mechanisms as well as the effective implementation of the initiative to build a net zero emissions network in Asia and the Transition Initiative. energy in Asia, and accessing the 10 billion USD support package that Japanese Prime Minister Kishida Fumio pledged at the 26th UN Climate Change Conference (COP26), he said. 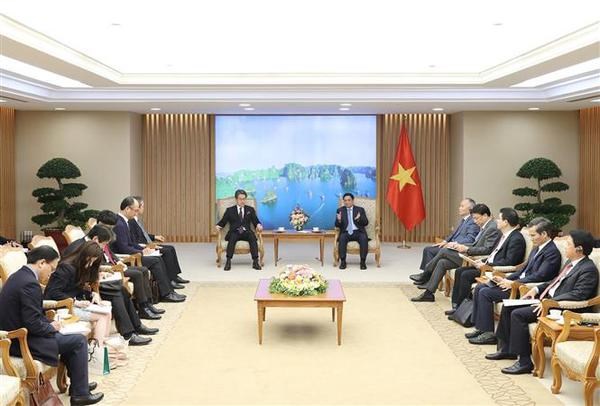 A preview of the meeting (Photo: VNA)

Premier Chinh also requested JBIC’s assistance in policy consultations, sources of capital, technology, human resources and management experience for Vietnam to accelerate energy transition and develop the renewable energy industry, and to improve the manufacturing capacity of equipment in the field of solar energy and wind energy.

The Vietnamese leader asked Japan and JBIC to promote the next-generation ODA cooperation program he and his Japanese counterpart discussed earlier, while helping Vietnam implement strategic infrastructure projects, particularly in the areas of transport, climate change and digital transformation. as in building medical capacity, promoting innovation, education and training of human resources.

For his part, Maeda spoke highly of Vietnam’s achievements during the recent difficult period, with effective policies to control COVID-19 and ensure economic stability and development. He commended Vietnam’s commitments and actions on environmental issues.

He endorsed the Vietnamese leader’s proposals and shared a number of ideas and solutions for specific cooperation contents.

He affirmed that JBIC would like to cooperate and support Vietnam in various aspects and fields.

Vietnam is one of Japan’s two main partner countries in ASEAN in implementing cooperation strategies on climate change adaptation to realize the idea of ​​building a net-zero community by Asia with specific plans and projects, he said./.

Which European country has the best digital quality of life?

Denmark has the best digital quality of life in Europe, according to an index that …